The Bard's Tale Wiki
Register
Don't have an account?
Sign In
Advertisement
in: Villains, Tales of the Unknown, The Thief of Fate,
and 3 more

Tarjan is a narcissistic and powerful magic user who is worshiped by many. He is better known as the "Mad God." He is apparently powerful enough to turn a whole city (namely, Skara Brae) into ruins.

From a magic mouth within the Sewers:
Know this, that a man called Tarjan, thought by many to be insane, had through wizardly powers proclaimed himself a god in Skara Brae a hundred years ago...

Tales of the Unknown[]

In Tales of the Unknown, Tarjan's presence is limited to being a statue atop Harkyn's Castle that comes to life and attacks the party before allowing them to proceed further. During the battle, he becomes a rather dangerous opponent, casting Death Strike and Stone Touch quite regularly.

The party activates him by approaching his statue form while having the Eye in its possession. After the battle, the party is teleported to Kylearan's Amber Tower.

The Thief of Fate[]

In The Bard's Tale III: The Thief of Fate, Tarjan reappears as a malevolent deity bent on destroying everything and everyone in the universe. It is up to the party to stop him before time itself is consumed.

Eventually, in Tarjan's home dimension of Malefia, the party has to face the Mad God and defeat him.

From the jacket cover 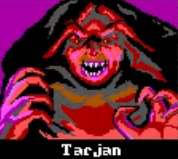 American Computer Scientist Robert Tarjan was the inventor of many highly technical algorithms. The programmers of The Bard's Tale were very likely familiar with his work.

Community content is available under CC-BY-SA unless otherwise noted.
Advertisement